On Sunday, following an arduous 8 hours in the saddle, our fees clerk Stuart successfully completed his British Red Cross cycling challenge. His final day took him on a 103 mile ride through some of the most beautiful – but lumpy – countryside that Lancashire and Yorkshire have to offer.

Stuart’s aim was to ride 1000 miles in September for the Red Cross #milesforrefugees campaign.

A thousand miles represents the distance that a refugee fleeing Damascus would travel to reach Athens. Yet, even once refugees have fled their homes to safety, their difficulties are not over. The Red Cross help refugees adjust to life in the UK. Their support ranges from providing emergency provisions for those facing severe hardship to helping to reunite families. This September, they asked supporters to go the extra mile in order to help raise funds.

“As the month progressed,” Stuart said, “it became apparent that planning was almost as important as the cycling itself. Which routes to take? How to extend the commute? How to fit in a ride around family and work commitments? And then I had to factor in the weather.”

“A week or so ago, I had earmarked time off work in order to try and get in a full day of riding. Unfortunately, the route had to be cut a little short due to some very stormy weather. It left the last week – and then the last day, in particular – with a heavy workload. I would have to ride my first imperial century in order to complete the challenge!”

“It was a very tough day and a difficult month overall. However, with fantastic encouragement and support, over £1300 has been raised. It was definitely worth the effort!”

You can still sponsor Stuart at: https://milesforrefugees2018.everydayhero.com/uk/stuart 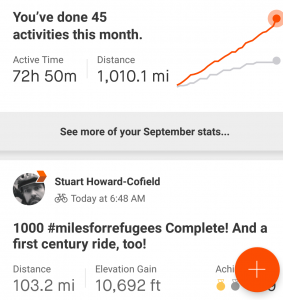