Stuart often commutes by bicycle to chambers. With weekend rides added, he usually completes around 500 miles of cycling per month. This September, Stuart is aiming to double this as he rides 1000 miles to support the ‘Miles for Refugees’ campaign.

A thousand miles represents the distance that a refugee fleeing Damascus would travel to reach Athens. 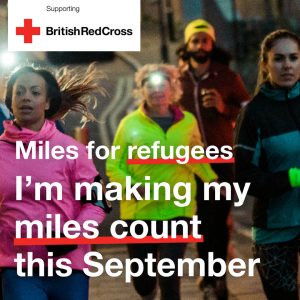 Every day an average of 34,000 people are forced to flee their homes as a result of conflict, persecution and violence. An estimated 65 million people around the world have been forced from their homes. This is the largest number of people who have had to flee the safety and security of home since World War II.

The Red Cross help refugees adjust to life in the UK. Their support ranges from providing emergency provisions for those facing severe hardship to helping to reunite families. This September, they have asked supporters to go the extra mile in order to help raise funds.

Of the challenge ahead, Stuart says: ‘I suspect that one of the biggest difficulties I will face will be how to fit the extra miles in around everyday life. Food could also be an issue – I already supersize my portions in order to fuel my rides. It could be an interesting month!’

Stuart’s charity page is: https://milesforrefugees2018.everydayhero.com/uk/stuart . Here you can sponsor him and learn more about the campaign and his progress so far.

Stuart is also writing a blog about his experiences doing the challenge. This can be found at: https://everyjourneyofathousandmiles.wordpress.com/