The former care worker, Laura Bardsley, 26, had a four month long affair with the 15-year-old and, despite being arrested multiple times, continued to make contact with him. She even went as far as to acquire a mobile phone in jail in order to message him.

Bardsley was jailed for six years after she admitted four charges of sexual activity with a child, harassment and possessing a prohibited item in prison.

18 St John Street’s Daniel Calder, prosecuting, said: ‘When the defendant’s cat had kittens, the boy took an interest, and would frequently visit by himself and would also take toys to play with her children.

‘His mother began to notice he was spending all of his free time at the defendant’s address, and appeared to lose interest in his hobbies. He would often dress smartly or in uniform to visit the defendant, and would stay late into the evening.

‘They regularly exchanged sexually-charged text messages in which she said she loved him, and when he went on his summer holiday, she wrote love letters at his request.

‘She was again bailed with conditions not to contact him or to go to his address but she encouraged him to set up a social media account in a woman’s name so that they could communicate incognito.’

Daniel was instructed by Anne-Marie Nicholls of the CPS North West RASSO Unit.

Sentencing Bardsley, Judge Bernadette Baxter said: ‘During the lockdown, the boy’s mother offered help and support towards you as you were at a low ebb, and your relationship was in difficult place.

‘But you yourself are the mother to children, and you should know how fragile they are.

‘This boy was 15 and extremely vulnerable and was someone who you knew was easy to exploit and for your own selfish and manipulative ends, you decided to exploit this boy to provide yourself with some sexual satisfaction and emotional comfort.

‘Even when the police became involved, on at least three occasions, you persisted in manipulating this boy and you made efforts to stop him from cooperating with the police.

Bardsley was also made subject of a Sexual Harm Prevention Order and will have to sign the Sex Offender Register for life.

Further details can be found in the Manchester Evening News and The Daily Mail.

Daniel regularly prosecutes and defends serious and complex criminal cases in the Crown Court and, 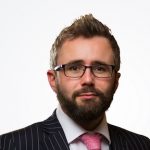 alongside dealing with matters of rape and sexual abuse, his caseload includes offences related to serious violence, armed robbery, firearms, fraud and the large-scale importation, production and supply of drugs.

For further information on Daniel Calder and other members of the Criminal Department, please contact a member of the criminal clerking team on 0161 278 8262 or crime@18sjs.com.