Rehana Begum discusses the importance of Article 6 (ECHR) in the context of remote interim removal hearings and the need for very careful weighing of the balance of harm during the current health crisis.

In what has been a practically vertical learning curve for me in terms of getting to grips with technology for remote working; my experience of it so far has served as a salutary reminder of why I became a lawyer in the first place; to fight for justice and defend the rights of those too weak and vulnerable to defend themselves.

A court’s decision to authorise the removal of a child from the care of a parent at an early stage of court proceedings, sometimes the first hearing, is arguably one of the most grievous interferences with Article 8 that a court can make. It is axiomatic that such a decision ought to be made fairly.

The tension between the need to continue to deliver justice (by remote means) and the need to ensure fairness between the parties seeking justice has brought into sharp focus two particularly important questions in the context of urgent interim removals:
• Firstly, does the current public health emergency alter the balance of harm when considering interim removal?
• Secondly can a fair trial be achieved in urgent ICO removal hearings conducted remotely?

WEIGHING UP THE BALANCE OF HARM
In the current climate, there is a need for more careful scrutiny of the risk of harm traveling in the opposite direction of the risk from parents. The balance may well tip against removal in ways it would not have done before. For example, in a recent case I acted for a mother accused of breaching a working agreement prohibiting contact with a violent ex – partner. The child involved was 18 months old. Direct contact, which would ordinarily go some way to mitigating the emotional harm caused by removal, was not an option (and wouldn’t be for the foreseeable future).

The alternative video or telephone contact would not meet the contact needs of a child so young. The intended foster family had not been tested for Coronavirus which potentially increased the chances of the child becoming infected and ill which would further intensify the emotional harm from not being able to receive care and comfort from his mother. In this case, the balance did tip against removal.

To manage the risk the Local Authority called on assistance from the police who were willing to carry out more welfare checks than would ordinarily be the case, including visits to the ex-partner’s home.

In another recent case, I acted for a father found to have inflicted an injury to a 6 month old child through rough handling. Prior to the social distancing restrictions, the care plan provided for the father to move out for a few weeks whilst he undertook some remedial parenting work after which he could re-join mother and baby in the family home. The mother was heavily dependent upon the father’s support within the home but was able to competently tend to the care needs of the baby.

The matter was finalised just as the “lockdown” began which meant once father moved out he would have had to stay out for an indeterminate period of time. This would have put pressure on Mother as he would not be allowed to come to the house to help her. In this case, the care plan had to be reformulated to allow father to undertake the work whilst still at home on condition that he did not undertake any direct child care tasks.

Does urgency trump the right to a fair trial in urgent interim removal cases?
There will, unfortunately always be cases where the urgent need to ensure a child’s safety demands immediate removal, such as the 4pm EPO on a Friday concerning a child presented at hospital with a serious inflicted injury and no explanation from the parents/carers. Those hearings will need to take place even if the parents don’t want them to. The impact upon the parents’ Article 6 rights can be mitigated by a swift return date, with evidence that can be tested at a hearing. There are other cases however where the need for urgent removal is questionable and should be rigorously analysed.

In the last 6 weeks there has been much debate and guidance and impassioned advocacy on the merits and limitations of the ability to deliver justice remotely. It is not repeated in detail here. This article serves to highlight the practical considerations that need to be at the forefront of every advocate’s mind when acting in a remote urgent interim removal hearing. Suffice it to say that there has been an inevitable and necessary evolution of the guidance as to when it is and is not suitable to conduct a remote hearing; borne of the benefit of experience of the last 6 weeks.

The initial guidance from the PFD on 19/03/20 set out that remote hearings be the default position where possible, with court based hearings only if the needs of justice so demanded. Subsequent combined guidance from the Lord Chief Justice, Master of the Rolls and PFD, 14/04/20, in a Message to Circuit and District Judges served as a helpful reminder that the overriding objective in FPR rule 1 to conduct proceedings justly still applied and suggested that urgent cases must continue to be dealt with by whatever means is appropriate to the needs of the case, provided that the Judge is satisfied that this allows a fair hearing.

Guidance was subsequently provided by the PFD in Re P: (A Child Remote Hearings) (2020) EWFC 32, a case involving serious FII allegations, which was set to conclude with a fully contested final hearing. The President expressed the firm view at [§25] that just because a remote hearing can be conducted does not mean that it should be conducted, notwithstanding the negative impact on the child’s welfare of a delay in hearing the matter. His reasoning in [§26] provides an essential reminder of the obligation imposed upon the Judge to achieve fairness, particularly from the perspective of a lay party.

The Court of Appeal has since dealt with 2 cases concerning remote hearings: Re A (Children)(Remote Hearing: Care and Placement Orders) [2020] EWCA Civ 583 and Re B (Children) (Remote Hearing: ICO) [2020] EWCA Civ 584. Of relevance to this article is Re B in which the decision of a judge to make an ICO and sanction removal at an interim telephone hearing was set aside. Re A, Re B and Re P will be considered in more detail in further blogs.

Before moving on to a practical considerations in a remote interim removal hearing, it is I think worth pausing to go back to basics and consider precisely what a fair trial should be.

A fair hearing – the basics
Article 6 (ECHR) entitles a person to a fair and public hearing that:
• Is held within a reasonable time;
• Is heard by an independent and impartial decision maker;
• Gives a person all the relevant information;
• Is open to the public (subject to exclusions in highly sensitive cases);
• Allows a person to be represented and have access to an interpreter; where appropriate;
• Is followed by a public decision; and
• Includes an explanation of how the court reached its decision.

I am going to use the example I gave earlier in this article, of the case where removal was sought as a result of breaches of a working agreement, to demonstrate how these principles of fairness came dangerously close to being sacrificed on the altar of skype for business. At the advocates meeting the day before the hearing, it was established that the father wished to represent himself. He did not have an Internet enabled phone but did have access to the internet at home and believed he would be able to borrow a laptop from his neighbour although he was not confident with technology. The mother had access to an internet enabled phone but would have to participate in the hearing with the distraction of having to care for her 18 month old child.

The Local Authority and the Guardian considered that the hearing should go ahead remotely (notwithstanding that this would require the father to breach the government’s social distancing guidelines and place the health of himself and his neighbour at risk in collecting the laptop); and because it was father’s choice not to obtain representation (an advocate likely being more able to operate the technology so father had taken the choice to disadvantage himself). Mother was expected to concentrate on the evidence and navigate an electronic bundle whilst caring for her 18 month old child.

On mother’s behalf I was particularly concerned that she would not have ready access to the advice and reassurance I could provide her with during the hearing as evidence developed. Happily the Judge accepted that the hearing could not proceed fairly in circumstances even though on a solely technical basis, the hearing could have taken place remotely.

Had the Judge not taken that decision I would certainly have appealed on the same grounds as in Re P. The practical considerations to be borne in mind when considering whether or not a hearing can be fair are easily identifiable from this example above but are far more eloquently set out in the words of the PFD in Re P as follows:

“[26] …….The Judge who undertakes such a hearing may well be able to cope with the cross –examination and the assimilation of the detailed evidence from the e-bundle and from the process of witnesses appearing over Skype, but that is only part of the judicial function. The more important part, as I have indicated, is for the judge to see all the parties in the case when they are in the courtroom, in particular the mother and although it is possible over Skype to keep the postage stamp image of any particular attendee at the hearing, up to five in all, live on the judge’ screen at any one time, it is a very poor substitute to seeing that person fully present before the court. It also assumes that the person’s link with the court hearing is maintained at all times and they choose to have their video camera on. It seems to me that to contemplate a remote hearing of issues such as this is wholly out-with any process, which gives the Judge a proper basis upon which to make a full judgment. I do not consider a final hearing of this sort would allow effective participation for the parent and effective engagement either by the parent with the court, or as I have indicated, the court with the parent. I also consider that there is a significant risk that the process as a whole would not be fair.”

Conclusion
My experience has shown me that it is more important than ever to keep Article 6 rights at the heart of a hearing and guard against over enthusiastic but understandable attempts to achieve a remote hearing. The health crisis cannot be permitted to undermine the fundamental principles that uphold our legal system. 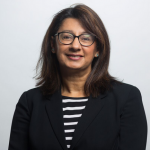 Rehana Begum is head of the Family Department at 18 St John Street Chambers. If you have any queries about this or any other related subject, please feel free to contact us on our usual contact details and we will be delighted to assist you.